I love shortbread cookies. They are a simple sweet treat, but their very simplicity makes them a favourite. I bake and eat them throughout the year, but Christmas always makes for a great excuse to prepare these cookies.  Here’s an updated version so that those on special diets can enjoy them too!

Should they be called biscuits or cookies? I tend to go with “cookie” myself, although it seems to be a topic of debate for many people. Although this debate is usually considered to be a difference in UK vs American English, there is a bit more to it. Some professional pastry chefs argue that biscuit is the only correct name for a shortbread, because a cookie is leavened with yeast, or baking soda. Others counter-argue that biscuit implies “twice baked” (From the French “bis” (twice) + “cuit” (cooked)).  Shortbread is generally considered a Scottish delicacy and they are called biscuits in Scotland. Doesn’t really matter what you call them though, they are good!

Shortbread tend to come in three shapes: petticoat tails (one large round cut into wedges soon as it’s out of the oven), fingers, or smaller rounds. You can of course make them in different shapes as the mood takes you. I like to make them into individual round biscuits, just slightly big enough that you can’t eat it in just one bite!

I worked on adapting a traditional Scottish shortbread recipe using Splenda instead of sugar for a family member who loves them, but has to avoid sugar.  Yes, sugar-free shortbread! Traditionally, proportions for shortbread biscuits are 1-2-3 (1 part sugar, 2 parts butter, 3 parts flour). This adaptation has proven to be a success. The texture is slightly different than if sugar is used, but not significantly so. There is controversy over the safety of Splenda (and any other sweeteners, artificial or not). Then again there is controversy over how healthy (or not) butter is. My take on it: Nothing is perfect, enjoy in moderation.

Many variations on the shortbread biscuit theme can be found, with the addition of various ingredients such as vanilla, spices, fruits, etc. For me, the glory of the shortbread resides in its simple, humble origins.

I prefer to use a wooden spoon and my hands to mix this dough, but you could use an electric hand mixer for creaming the butter + Splenda mix.

If you use salted butter, you don’t need to add salt to the recipe. 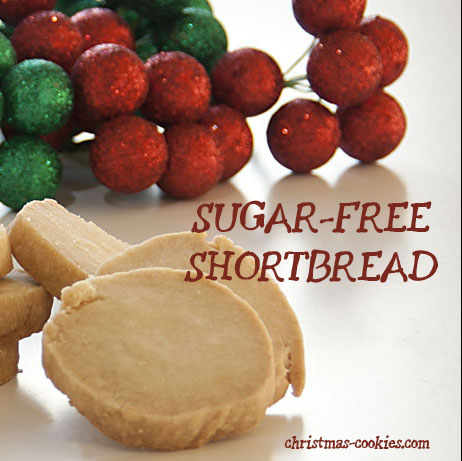 Note: The cookies will not brown as readily as they would if sugar was used. Be careful not to overcook them waiting for the edges to brown.

Scan this QR code to return to this page and rate the recipe.

Alternately, you can return to this page to write your review:
https://www.christmas-cookies.com/blog/sugar-free-shortbread/