Why Khrustiki?  Even if your oven doesn’t get much use through the rest of the year, you might find yourself it was bigger when the holidays roll around. Between the all the holiday baking and those big meals full of side dishes that need to be kept warm, oven space can often be at a premium. That’s why it’s useful to bookmark a few recipes for treats that don’t need to be baked in the oven. Sometimes that means no-bake sweets, such as Eskimo Snowballs and the ever-popular, if not exactly Christmas-y, chocolate “Frogs“. Another option, used for many European cookies, is to fry them instead of baking them.

Light, delicate Italian Pizzelle are one well-known option, and Scandinavian Rosettes are another. Unfortunately they both require special irons, which most bakers don’t happen to have just lying around. Russian Khrustiki, or twig cookies, don’t have that problem.

They’re a simple recipe, lightly sweetened and subtly flavored, and the dough just needs to be rolled and cut. Shaping the cookies is the fun part, and it’s something the kids will happily help with (you’ll have to do the frying yourself, though). Serve them with strong coffee or hot chocolate for dunking, or warm up a small bowl of apricot jam or good-quality marmalade to use as a dip.

Khrustiki have a vaguely doughnut-like quality about them, but they aren’t nearly as rich or sweet. If you love doughnuts but want a more virtuous alternative, this could be it.

Adapted from a recipe found in Anya von Bremzen’s Please To the Table. 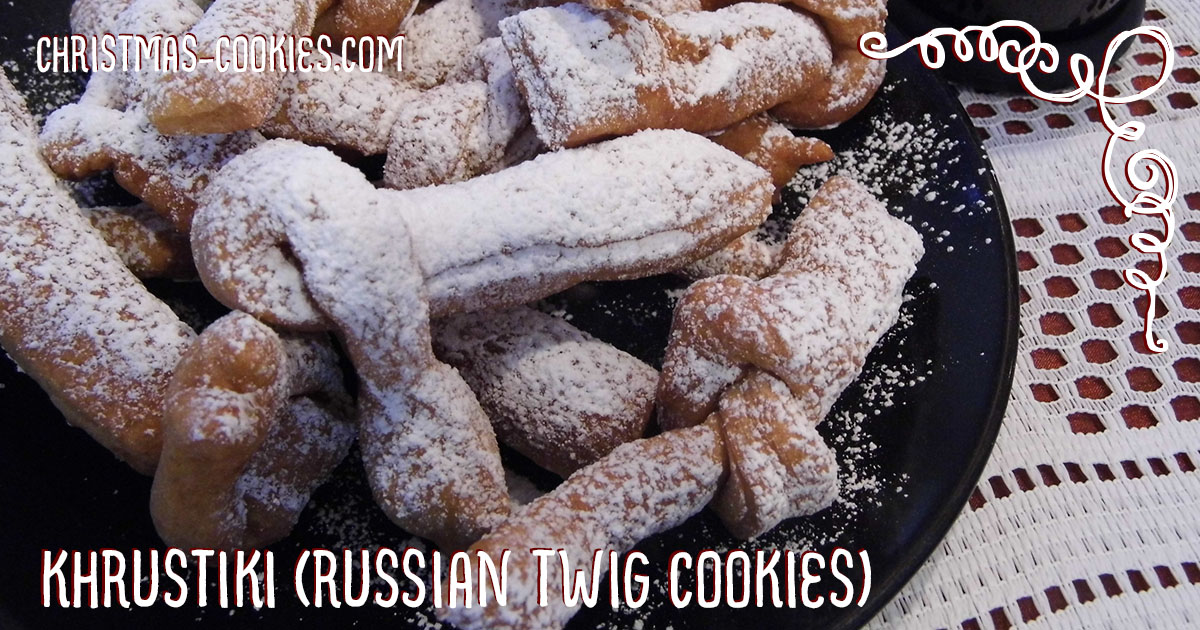 Whisk the wet ingredients together in one bow, and the dry ingredients – except for the confectioner’s sugar – in a second bowl.

Add the dry ingredients to the wet, and stir until it forms a stiff dough. Turn the dough onto a lightly floured counter, and knead it until it’s smooth (if you’re using a stand mixer or a food processor, let the machine do most of the work and just finish it on the counter).

Roll the dough out to a rough rectangle, 1/8” (3mm) thick. If your counter space is limited, divide the dough and roll half at a time.

To make the traditional twig shape, cut a lengthwise slit about 2/3 of the way along a strip of dough, and pull the other end through the slit. You can also tie them in knots, roll them into thin cylinders, or pinch and twist them into random shapes. If you have any irregular edge pieces of dough left over, you can cook those just as they are.

Heat your oil to a working temperature of 375F (190C). It’s easiest in an electric fryer, but if you don’t have one use a narrow, high-sided pot and monitor the temperature with a candy or deep-fry thermometer. Drop the twigs a few at a time (don’t crowd them) into the pot, and fry for 2 to 3 minutes until they’re an even golden-brown on all sides. They should turn themselves over as they cook, but if not you can turn them with tongs or a slotted spoon.

Remove the finished cookies to a tray or platter lined with paper towels, then add another batch to the hot oil. Repeat, until you’ve cooked up all of your prepared strips. Let the finished cookies drain and cool completely on the paper towel. Once they’ve reached room temperature, place them on a serving plate and sift confectioner’s sugar over them. The plate of cookies should look like a mound of snow-covered twigs when you’re done.

Notes: If you wish, you can use a tablespoon or two of real rum or brandy, instead of the extract. If you do, reduce your water by the same amount.

*Save your egg whites and use them to make Zimtsterne (cinnamon stars) or Almond Macaroons.

Scan this QR code to return to this page and rate the recipe.

Alternately, you can return to this page to write your review:
https://www.christmas-cookies.com/blog/khrustiki-russian-twig-cookies/